You know those days?

My sweet half actually made me get back into the bed, and start over!

If your day or week or month has been cluttered, you will really appreciate this post. 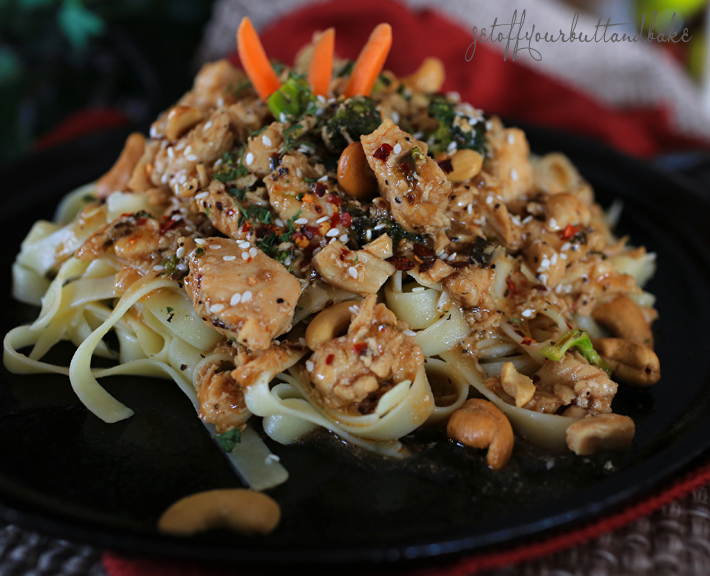 From the start, I was prepared for a loaded kind of day.

It went from “loaded” to “insane” in minutes.

My cell phone rang, and it was my favorite voice on the other end of the line.

It quickly became apparent that he was about to drop a bomb my way.

“Hi Honey . . . I might be bringing home company for dinner tonight.”

I simply didn’t have a choice, I had less than 1 hour to make a main dish a nice salad and hopefully dessert!

It does say (and then some) though.

I want you to know that I was sick to my stomach, since I rarely buy anything in a pouch & pre-made.

Campbell’s graciously sent me a coupon for one of these new Skillet Sauces, which is the only reason I had one.

Just so you know, you can head over to

for your very own coupon or an array of fabulous time tested recipes.

I had a hard time deciding which one of the Skillet sauces to buy though.

I wanted Shrimp Scampi . . . but my sweet half has to make a trip to the emergency room after eating shrimp!

I settled on the Toasted Sesame with Garlic and Ginger.

I never invite anyone over to dinner . . . without taste testing first.

I was doing it though.

I scanned the directions quickly, and it seemed easy as pie.

I Washed the boneless skinless chicken breasts and patted dry.

I simply chop, chop, chopped the chicken in about 1 inch pieces.

You could also cut the chicken breasts into strips.

The back of the Campbell’s Skillet Sauce says:

Step 2:  Add Chicken and cook until lightly browned and cooked through.

I also seasoned with salt & pepper.

You know me & pepper.

See that pot boiling behind the Campbell’s Skillet Sauce?

I decided to quickly boil some Fettuccine noodles to serve with the Saucy Sesame Ginger Chicken.

I’m just not much of a rice girl.

Now for the Taste Test.

Something this easy, cannot be this good.

I was taking a risk with company coming over, but I couldn’t resist tossing in a bit of broccoli for kicks.

I telling you, I was sooooo prepared to doctor this up.

I didn’t need to.

I will come totally clean though.  I added 1 teaspoon of Brown Sugar.

FYI:  I add a teaspoon of sugar to everything!

This particular sauce would be good with thin strips of steak or pork as well.

You could add black beans, kidney beans, corn and layer it in a tortilla!

As you can see, I decided to plate my delicious saucy chicken with Fettuccine noodles.

Everything I added afterwards was simply for styling pictures!

. . . a sprinkle of sesame seeds & slivered carrots and a few cashews.

I even had time to make a nice green salad & Angel Food Cake for Dessert!

We have been making smoothies &

Campbell’s Kitchen has made it super simple to navigate & literally, there are thousands of recipes & decadent pictures.

Last but not least, don’t forget, you can still leave a comment on the last post to qualify for an awesome Cookbook giveaway.

When you’re having one of those cluttered days,

Campbell’s has been around for a very long time.

Heck … I was eating Campbell’s soups when I was a baby.