Did you know that Jordan Almonds are dangerous.

Really good . . . but detrimental to teeth.

This I know from experience.

While sitting in a dentist office, awaiting my 16th appointment . . . for one little implant, I spotted this recipe after reading 25 magazines.  That was a long sentence, but so true. I guess you can figure out what lead to my implant.  It’s a long process.  It’s a five to six month process.  Am I still eating Jordan Almonds?  Yes . . . but I suck on them first! 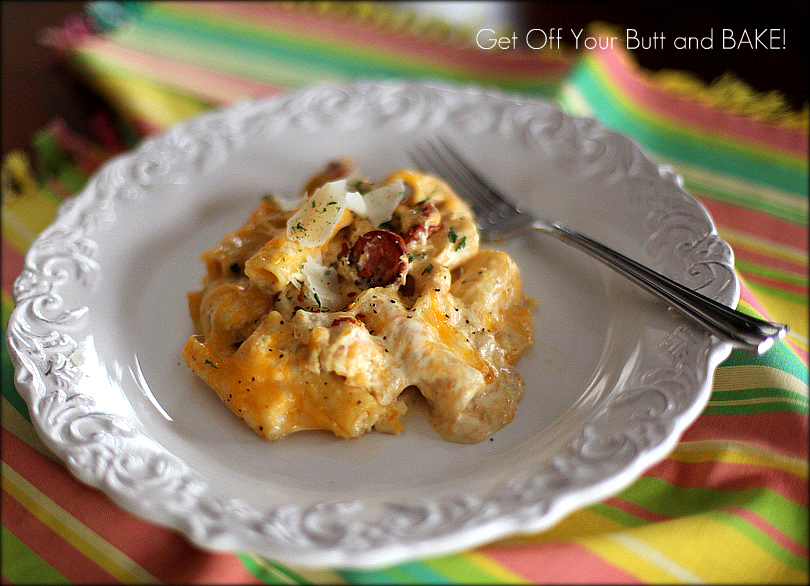 This recipe has been cluttering the bottom on one of my purses for over a year now.  It was almost unreadable, but the interest it has spurred in the beginning still lingered on.  So . . . knowing this wouldn’t be a husband favorite, I’ve put off making this for quite a while now.  Last night I decided he would just have to “buck up” . . . as he tells me to do quite often. 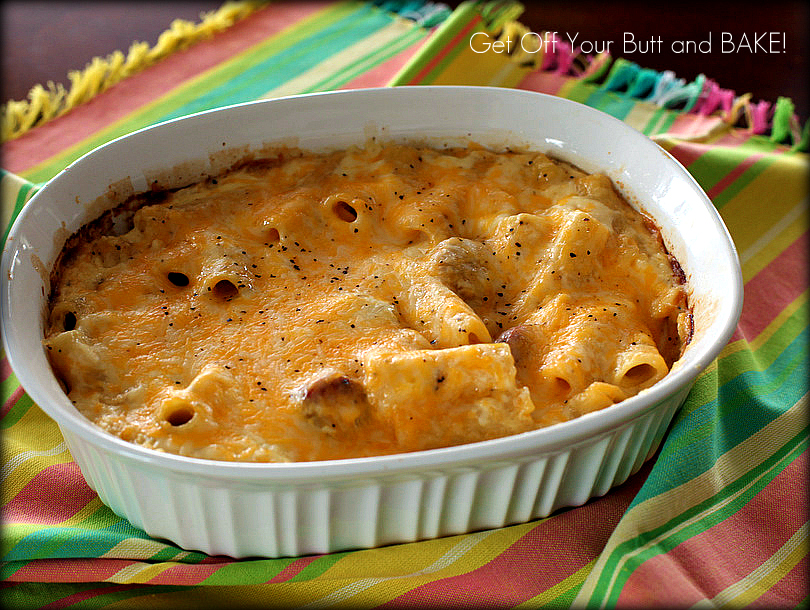 Since my husband works at least 45 minutes away from home sweet home, he usually gives me a call when he’s leaving the office. It took me a lot of years to train him to do this for me.  I appreciate this greatly, because I know when to start Cooking!  When he called last night, I must have had that “sound” in my voice that said:  “Your not going to like your dinner tonight.”  You see, he doesn’t ever ask me what we are having for dinner . . . but he did last night.  I just laughed, and he knew.  He just knew.  He ate a bag of Doritos and 2 oranges on the way home!  The mean of that. 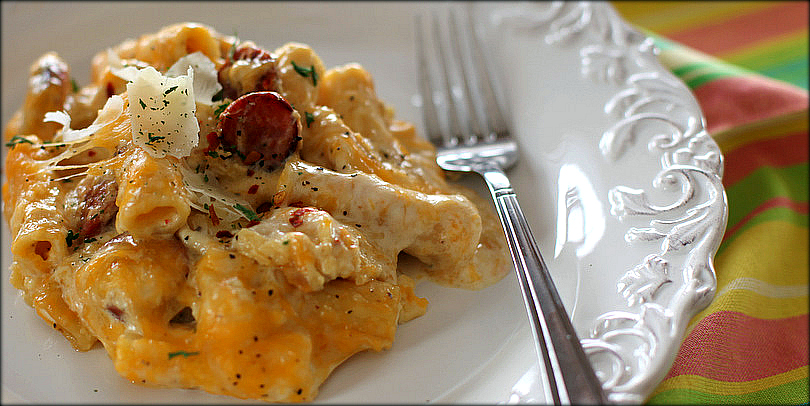 I served this with a green salad, green peas and some toasted Ciabatta bread.  It’s delicious!  It’s a delicious cream sauce, swimming with melted cheese & wrapped around Rigatoni pasta.  Chorizo sausage and tender pieces of Rotisserie Chicken breast are at home as well.  On top of all this goodness, is a layer of shaved Parmesan.

I’ll show you how easy this is to throw together for your own picky husband,

or boyfriend, or cousin, your dog or friend.

Start by bringing a big pot of water to a BOIL. I also add a couple pinches of sea salt and 1 Tablespoon of Olive Oil to my water. I wasn’t able to find Paccheri pasta, but the recipe says or Rigatoni.

Your box might not be the same size as my box. I used the whole box, but I didn’t need it all. The recipe calls for 1 package of Paccheri or Rigatoni.  That’s not telling us much.

Start by boiling the pasta in boiling water, until al dente. (about 8 minutes) When it’s done, remove the pan from the heat and drain the pasta.

(I ending up using – 5 cups of Cooked Rigatoni)

I used 4 large Chorizo Sausages, since I was also unable to find Barese Sausage.  It might have been lurking somewhere, but It didn’t find me! I didn’t remove the casings before slicing, and the brand I used was Falls Brand back in the meat section.

Toss the sausage around in a hot skillet and brown it well.  Note:  My sausage didn’t render much grease at all, but if yours does . . . get rid of it!

While the sausage is frying, cut your cooked chicken breasts in small pieces. I used Rotisserie Chicken that was in my freezer for just such spendid dishes.

If your sausage is brown & golden, turn the heat down to a very low simmer, and add your chicken.

Make sure that you turn the heat to the lowest setting on your stove, cover it with a lid . . . and walk away.

I decided to use two small casserole dishes in place of a 9×13 glass casserole.  I’m going to try to freeze one of these (before it’s baked) for later use.  Since it’s cream sauce, it just might not work.  I’ll let you know later.  Crack 3 eggs in a small bowl and whisk til almost frothy.

Measure 1 quart (4 cups) of Cream, and pour the beaten egg into the cream.  Whisk it all together until blended.

Chef’s Note:  The recipe calls for 4 cups of heavy cream.  After making this dish, I do believe that 3 cups of cream would be quite sufficient, if you are using 5 cups of cooked pasta. I actually used 2 cups of Heavy Cream and 2 cups of Half & Half. It worked out wonderfully.  The next time I make this, I will use 2 cups cream, 1 cup Half & half or even milk and 5 cups of cooked pasta. If you’re not concerned with calories, like my 50 yr. old body is . . . use all the cream!

Pour the cream and egg mixture into the skillet with the sausage and the chicken. Stir it until combined. I also added 1 Tablespoon of sugar to my cream.  It’s just my thing!

Measure 1/2 cup of White Wine or Chicken Stock, and pour it into the cream mixture and stir until all combined.  Season well with Salt & Pepper to your taste.

Add the drained Pasta and stir well. Remember:  I added 5 cups of cooked Pasta to my cream mixture.  If you are using 4 cups of cream, I would recommend using 6 cups of cooked pasta.

Add 1/2 cup of shaved Parmesan.  The smell is heaven!

Stir until combined.  Make sure your heat is on low, low, low.

Stir in 1 cup of grated cheese.  The recipe calls for Mozzarella.  I used a mixture of Mozzarella and Cheddar.  I decided to serve the green peas on the side, but you can add them to the cream right now….if you’d like. I suddenly had visions of Tuna Casserole!  You decide.

Pour the mixture into a 9×13 inch glass baking dish or casserole dish.  I used two smaller dishes. I didn’t grease them, but I’m sure it would be fine if your itching to do so. Pepper overload as usual!

Top with the remaining grated cheese and cover with tin foil. Note:  I did spray the dull side of the tin foil with cooking spray, so that it wouldn’t stick to my melted cheese! Bake in a 400 degree oven (in the center of the oven) for 45 minutes to 1 hour. You want the edges to be crisp and golden, as well as some of the bottom of the dish.  Oh yum.

Al forno is an Italian phrase that translates to English as “at or from the oven,” and is used to describe foods such as breads, pasta, casseroles or pizza that are often baked in an oven.