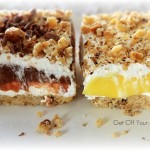 I love this Dessert, because you can change the puddings, and create something different every time. I don’t know anyone who doesn’t like this. It will be gobbled up in a jiffy! Pudding variations: Danish Dessert, Huckleberry, Raspberry, Strawberry, Chocolate, Pistachio or Lemon Lush Dessert.