Is a birthday happy at fifty?

A have a few more wrinkles, age spots, a few extra lbs, hot flashes. Ugggg. I made my hubbie and I  Birthday cupcakes . . . Angel food, Coconut & Lime. Kenny’s birthday is the day after mine – he still thinks he’s twenty.  My hubbie is actually nine years my senior, and could care less about age.  How come men get better looking the older they get.

I thought maybe we would party hardy this year, but instead we are going to attend a funeral.  At least it’s not mine!  These cupcakes were inspired by some other yummy cupcakes that a neighbor shared with me.  I haven’t been able to get her recipe yet, so I just improvised.  My better half loves Angel Food as you well know, so that is the base.  I added a bit of lime juice to the Silky Butter Cream frosting, and sprinkled some toasted Coconut over the top.  This cupcake will make fifty almost bearable! 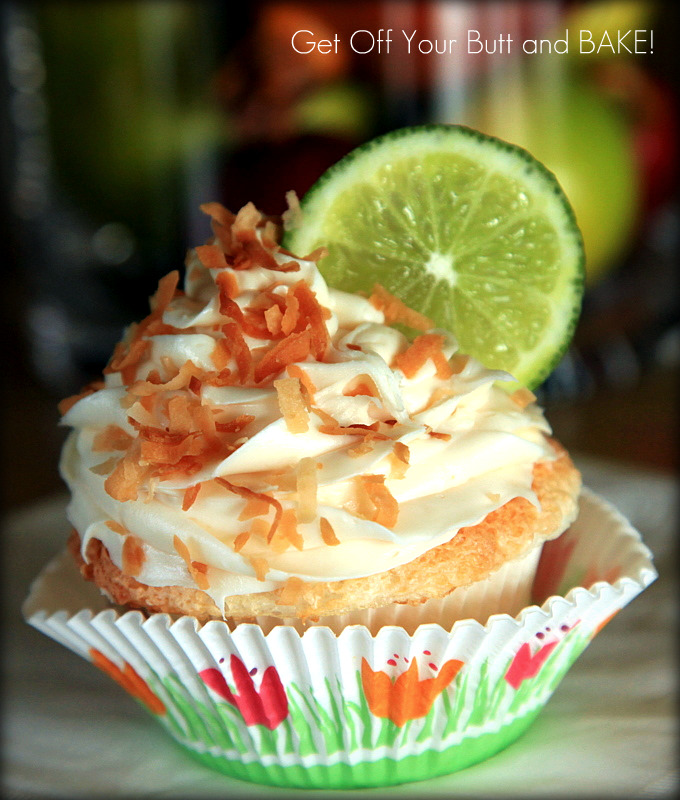 If You’re turning fifty or fifty nine . . . these Coconut Lime Cupcakes will make you feel better about it!

I simply made an Angel Food Cake, and made cupcakes.  Be careful not to over fill your cups.  Angel Food expands greatly in the oven.  Toast some coconut on a cookie sheet in a 375 degree oven until golden, and let cool.  I used a 2D wilton tip to apply the frosting.  You could easily make a powdered sugar glaze with fresh lime juice as well.  Leave little bits of lime zest in the glaze!

*This is great, because it’s not too sweet

This recipe makes a large batch that’s enough to generously frost a 2 layer 9″ round cake.  It could easily be halved.

Whip sugar and egg whites together in a double boiler until the temperature reaches 160 degrees F and sugar is dissolved.

Transfer mixture to the bowl of a stand mixer. With the whisk attachment, whip until mixture is cooled and soft, glossy peaks form, about 10 minutes.  Add butter a few pieces at a time until incorporated.   Don’t panic if mixture appears curdled.  Continue beating until butter is incorporated and frosting is fluffy and smooth.  It can take 8-12 minutes.  Add vanilla and beat until incorporated.

To limit air bubbles, switch to paddle attachment and beat at the very lowest speed for 5 minutes.

Storage:  After decorating with frosting store cake/cupcakes at room temperature.  To store for future use, place in an airtight container and store in the fridge.  When ready to use, bring to room temperature and beat until light and fluffy.