This sandwich is over the top good! 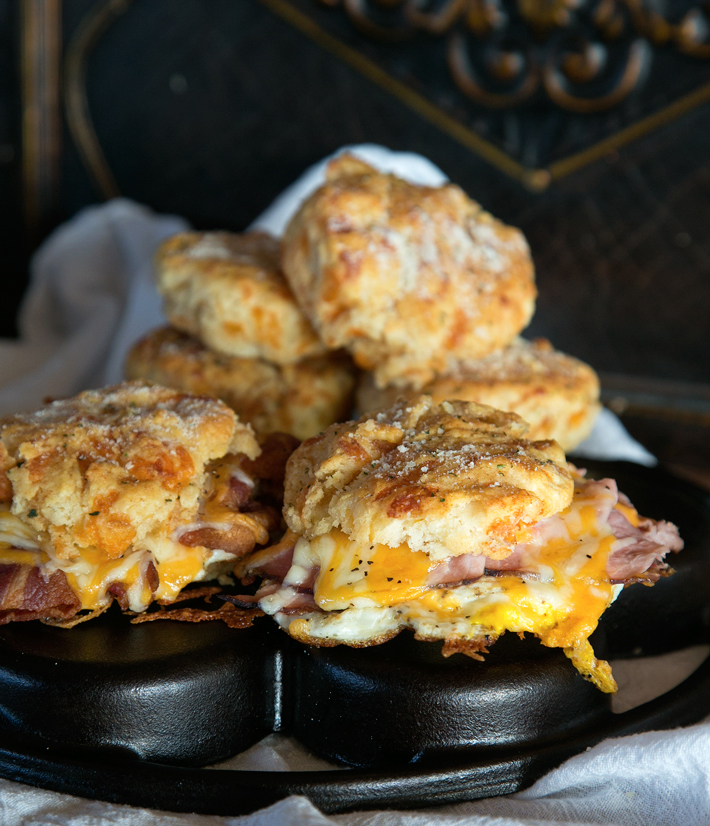 Busy has been my middle name.  The garden kind of takes over in the summer, so fast easy meals are always welcome at my house.

This is our go to “weekend sandwich”, but usually I make it on toasted English muffins. Trust me, the homemade versions are sooooo much better than the “drive-through” versions.

The other day, my daughter and I found ourselves in Sam’s Club.  That place is dangerous for me. We spied a box of Red Lobster Cheddar Bay Biscuit Mix.  We both grabbed a box and looked it over. All you had to do was add the Cheddar Cheese, cold water and melt some butter to brush over the top of the biscuits . . . hot from the oven.

Now . . . I’ve got 2 different recipes for home-made (not from a box mix) Cheddar Bay Biscuit recipes on this blog.  One of the recipes has Bisquick, the other recipe is totally from scratch.  Both recipes are very good and super simple to make.  Did I really want to buy a box mix?  Well . . . I wanted to see if the Red Lobster box mix tasted as good as the Red Lobster rolls that they bring to your table.

Guess what  . . . they do!  They are dangerously good and  light and fluffy, and delicious!!!  You’ll just have to trust me.  This is NOT a paid post. 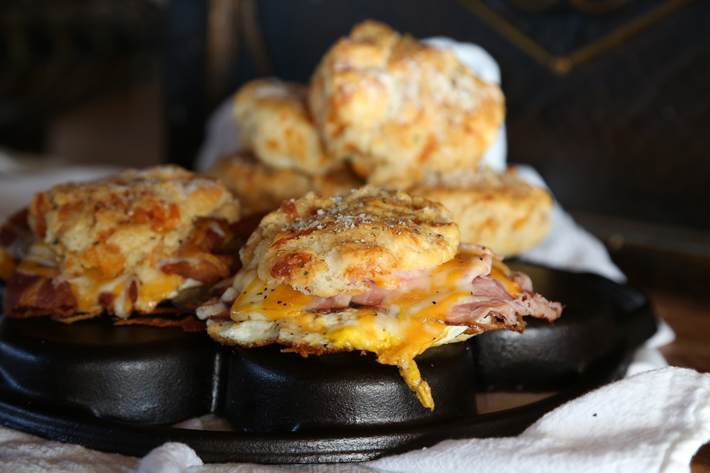 The box has 3 packs.  Each pack makes eight to ten biscuits. It takes about 2 minutes to mix a packet of dough.

The directions call for 1/2 cup shredded Sharp Cheddar cheese, but I added 1 cup cheese and 1 tablespoon extra cold water to make up for the difference.  I also added a touch of Parmesan cheese to the top after brushing them with the herb butter, but that’s it.  Oh delish! 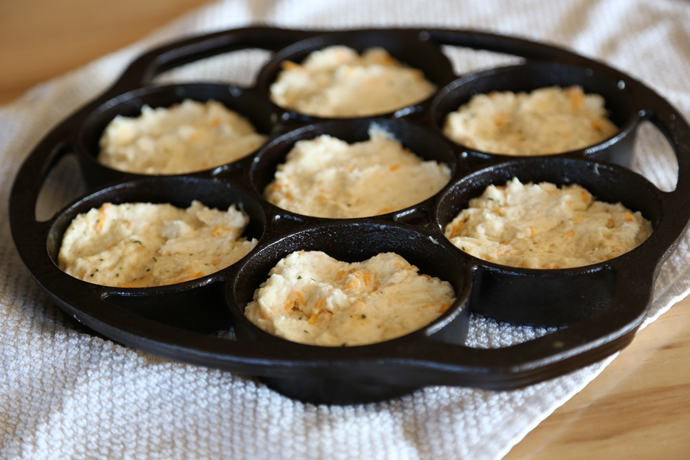 I had visions of Cheddar Bay Biscuit sandwiches whirling around in my head, so instead of scooping dough onto a cookie sheet, I scooped the dough into my cast-iron skillet pan.  I pressed down lightly with my fingers to flatten then dough . . . just a bit.  Think Biscuit Sandwich. 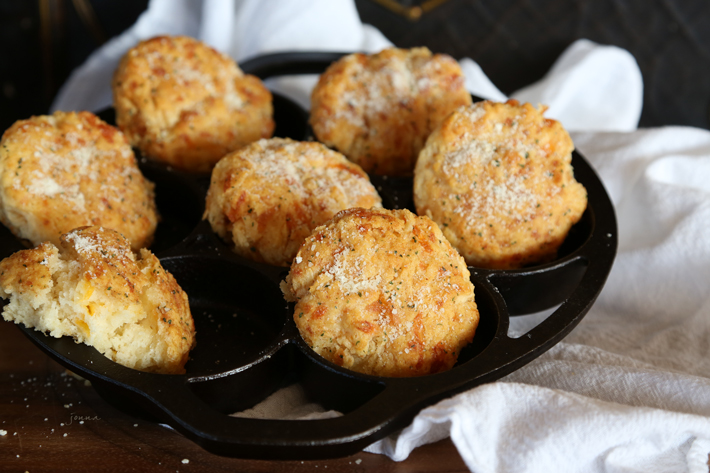 Once out of the oven, you melt some butter and add a packet of herb powder.  Brush that butter over the top of the biscuits.  I also added a bit of parmesan to the tops. Oh . . . it smells heavenly. 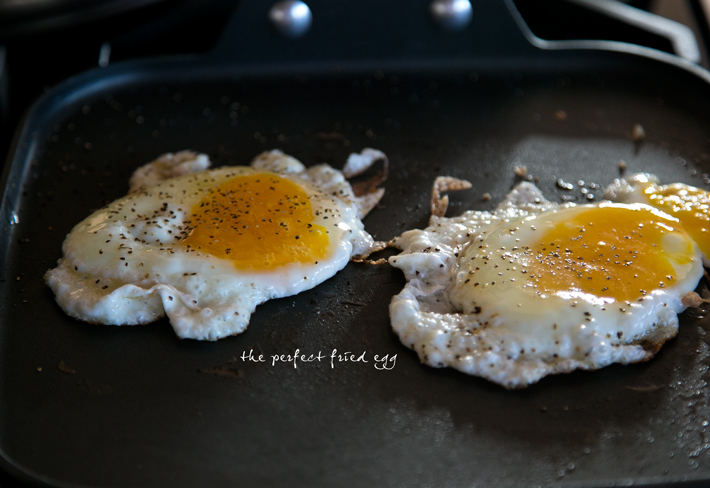 If you want to make a sandwich, you have to start with the “perfect fried egg.”  We like our fried eggs crispy and brown around the edges.  Instead of a frying pan, I like to use a small griddle.  It makes it so much easier to flip that egg. Turn the heat to medium high, and let the griddle get nice and hot.  Take a bit of margarine, canola oil or butter (butter alone burns quickly) and rub it over the top of that griddle.  Crack your eggs onto the skillet.  Add a bit of salt and pepper.  Add more pepper!  My sweet husband thinks I use too much pepper . . . I just don’t think so.  * oh yes, have you tried the cracked black pepper string cheese – it’s really good*

I like to break the yolk for a Sandwich, but that’s up to you.  If you like a soft yolk . . . don’t break it.  Once the edges of the egg start to turn a bit golden brown, you can flip it over. 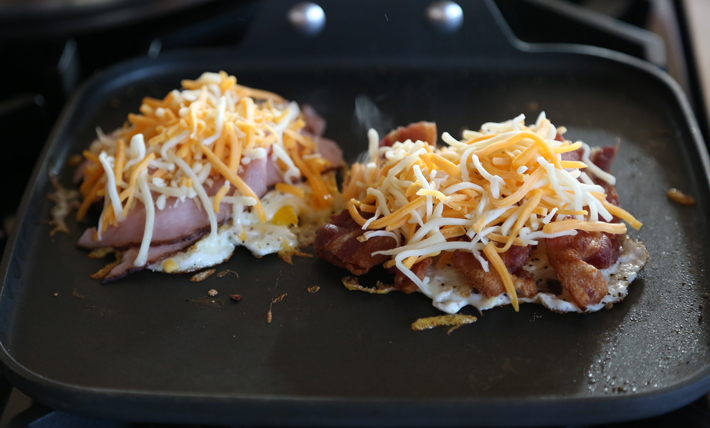 Once flipped, turn the heat down to low. Now, you can add the thinly sliced ham, slices of crisp Bacon and grated cheddar cheeses.  For another variation that’s really good, try Pastrami and swiss cheese.

Cover the griddle with a large lid, so that the cheese can melt all the way through. You could also make a tent, using a piece of non-stick foil. 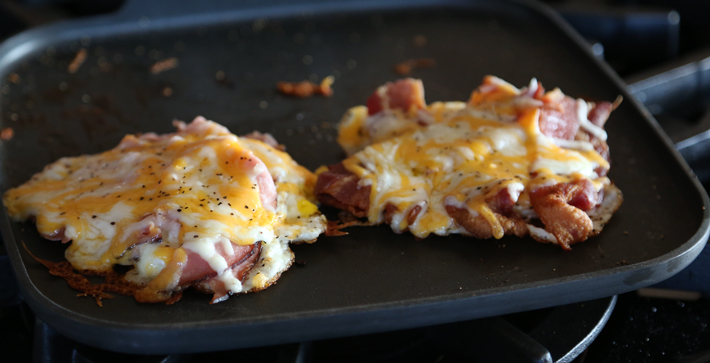 Once the cheese is all melted, you’re ready to roll.  Slice one of those yummy biscuits in half, and place your fried egg with cheese and ham or bacon or Pastrami or whatever you used, on top of the bottom layer.  You can spread a touch of pesto, mustard, mayo to the top layer if you’d like. If I’m using an English muffin, I always add something, but these garlic/herb glazed biscuits just didn’t seem to need it. 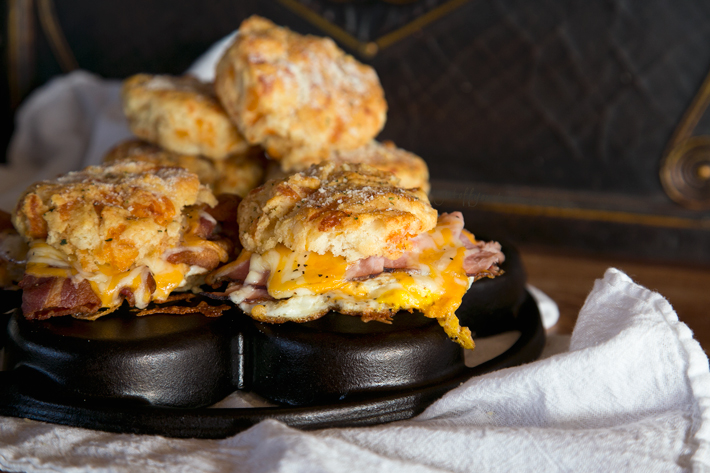 If you don’t have a box mix, remember this crazy blog has 2 different Cheddar Bay Biscuit recipes that are also scrumptious.